We're baaaacccckkk... no we've not forgotten our blog nor you, our faithful readers, just busy with life...you know how it can be!

Bill has been working so hard lately that we finally decided we needed to get out sailing for a few days to remind ourselves how wonderful it is and why we are doing all of this!  Hence we flew to Quadra, bent the jib on and loaded Terrwyn ready to head for Desolation Sound... right at our back door, as it were!

We knew that our friends, Dan and Alice from Seattle 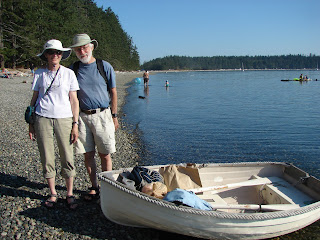 were sailing their 29' BCC, Shaula, in the area, in fact they had anchored right off Rebecca Spit just in front of our cottage for a few days earlier in the summer.  That was a nice surprise! 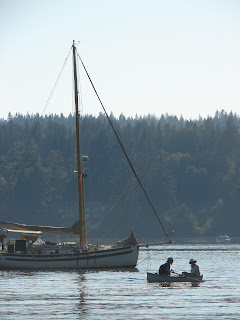 ...and so we got in touch through Sailmail to meet up with them somewhere in Desolation Sound.

The day we headed out was a beautifully calm and sunny so we decided to do some fishing and also try taking a "noonsite' with our beautiful new sextant.  Bill has always wanted to own and really learn how to use the world's best sextant and now he owns one and in typical Bill fashion is madly studying all about it's use!  I, too, am learning celestial navagation but Bill is taking the lead on this one.


As we trolled back and forth just south of Cape Mudge just off  Wilby Shoal (where the fish tend to gather, apparently!).... Bill did a successful noonsite with his beautiful new sextant... 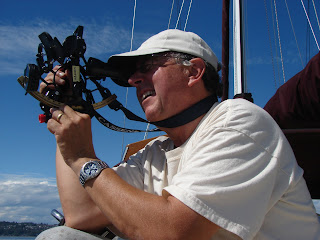 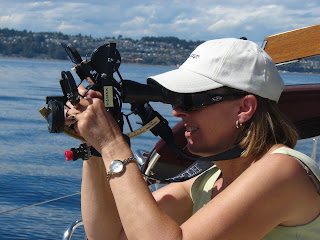 ...and how was the fishing you may ask??  Well, not one of those big or little fishes was willing to sacrifice him/herself to our delicious looking lure!... Huh!!
So with empty net but full of excitement we headed off to find Dan and Alice ...  whom we eventually found tucked in a little bay way up at the end of Pendrell Sound... 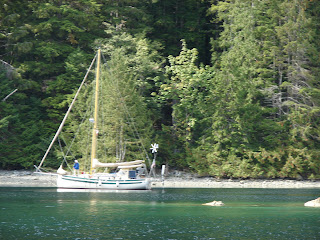 ... and, after they finally caught our attention by turning on their strobe light as they watched us merrily scooting by, we zipped in and rafted up with them for the night... had dinner together with the main course being Greenling - delicious fish that Alice had caught that day...mmmmmm oh so good!  Since we had no fish to bring to the table (as it were) I did the rice and salad! 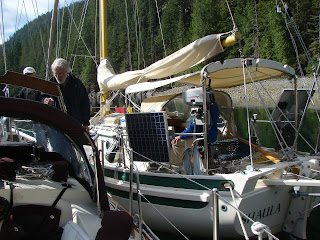 Of course we are constantly picking their brains, (Dan and Alice, that is, not the Greenling!)... about cruising as they have had 17 years experience of cruising in the South Pacific.

So Bill and Dan crawled all over both boats comparing and discussing details and ideas! 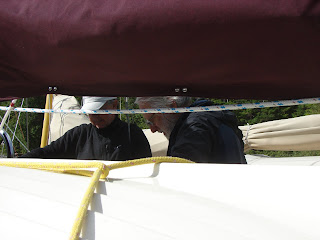 The next day we headed down Pendrell Sound to our next destination, which was a little anchorage in behind a tiny island called Ellworthy Island, at the bottom of the Sound. While sailing there we had our first experience of "willy waws" or "unpredictable sudden, strong gusts of wind down drafts" sweeping down from the high hills surrounding the Sound...keeps you on your toes, that's for sure!
When we finally had to head back to Quadra thick fog had rolled in and a Scotch mist added to the magical feeling as we sailed along. 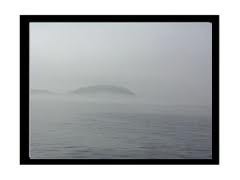 We took that opportunity to practise using our Nobletec digital navigation charts and radar.  The digital charts showed us not only where we currently were but also where we were heading (nice to know about that large rocky island hidden in the fog just off our port bow)... and our trusty radar let us know if there were any boats or other nasty obstacles in our way that wouldn't show up on our charts!
Phew!!  We made it safely back ready for our next adventure!
Posted by Cathy (aka Catherine) and Bill (aka William) at 9/08/2010 04:45:00 PM