The Highs and The Lows

This time Co-Cap William has written the post... read on...

A 1043 mBar High has stalled over Western Canada and brought cold clear skies with a northerly flow from the Arctic high latitudes in their clockwise Northern Hemisphere flow.  These global patterns created by opposing high and low barometric pressure differences determines the weather conditions we experience here on surface Earth.  (Google:  Weather, Canada  click on AB or BC then "Analysis Modelling" then "Complete Northern Hemisphere Coverage) or click here

or see map below:

These atmospheric pressure "cells" are truly gigantic, dynamic and fascinating.  Consequently meteorology is on the study list for off shore voyagers. We have been studying the works of Alan Watts' The Weather Handbook and the Modern Weather Marine Workbook  by David Burch and beyond in the weather chapters of all our Cruising "How To" texts such as Lin and Larry Pardey's Storm Tactics Handbook.

How did we get so old and not investigate this body of knowledge available to us all?  This preparation will aid in our decision-making on the high seas with SSB, GRIB files and expert synopsis analyses available to use bounced off the Ionosphere.

(Note from Co-Cap Catherine: for all you non ham radio readers Bill is talking about accessing this information through our ham radio which uses the ionosphere for us to send and receive messages!  Who knew??)


Avoid one of the Earth's greatest energy sources and violent weather i.e. hurricanes- hence studying leading expert analysis and historical records of the planet's weather zones is all part of the quest.

The Highs and Lows of yachting stretch beyond weather and the rest of this entry will not be a "family Christmas Card"!

Readers please be advised the following may be disturbing to some:

Balancing life's opportunities generally do not include circumnavigation in a small vessel by senior citizens, virgin in this pursuit... even sailing the "Coconut Milk Run".  Right.  We are a double-handed well found vessel bound for trade wind latitudes.  We are not a solo, nonstop, racing, Southern Oceans vessel.  Even so, as previously mentioned declaring our intentions in destination and especially ETD (Estimated Time of Departure) we raise the spectre of risk.  The sad tale of  Donald Crowhurst who died while competing in the 1968 Sunday Times Golden Globe Race, a single-handed, round-the-world yacht race exposes this pitfall for all we "wanna-be voyagers".

Hence our push to be totally re-fitted, blue-water ready by 2011.  "Island Time" has been a major Low in my High Pressure Emotional Cortex.  My error has been to honestly declare our ETD of June 2011... a January ETD may have given my voice more value with our mechanical team working for us.  That aside, the bimini will be built, the solar panel installed, the battery monitor working, the SSB-Pactor modem (communication system) functional, the life-raft cradle mounted, fans wired and paperwork in order.  We shall overcome and progress on and "The List" advances as we remain securely tied to the dock at April Point Marina.

"Live without a boat???"  "Why bother?" quips a Newfoundlander surgeon colleague, as recently questioned, with honest bewilderment in a room filled with conservative economically blessed gentlemen.  They had just replayed the "Two best days of a boaters life..."; "The wooden/plastic hole in the ocean..." and now " Boat Units" from their padded armchairs.  The Newfy's questions were received with blank superior stares.  To each their own...

Boating, rather like dogs, woodfires, sex and mountaineering can be lots of work, messy, frankly dangerous and, oh yes, expensive.  All of these costs are too much for many older folks with too little time, and too much money to lose.  I believe many have forgotten their childhood dreams, their best friend puppy, the warm dry crackling fire after a day on the mountain, gymnastic sex or a breathless virgin summer view.


The stable average barometric pressure of urban life with it's "fixed address" concrete foundations with property lines defined under shiny street lights to mall and superstore just down the tree lined street and regular paycheck deposited safely in one's growing portfolio... Is contested with the Highs and Lows of the perpetual motion of a small vessel at sea and 24/7 watches shared between a crew of two charging across the ocean in the middle of another night, where we have never gone before... The High and the Low.

Balance and compromise; to go or to stay.  It is all a compromise on a sailboat.  After all, the kids are all grown (almost), the mortgage paid (almost) and the career fulfilled (almost).  However, our time here is almost gone and we are not getting any younger.  In fact, time is running out at an ever accelerating pace.  Terrwyn is ready (almost) and there are only six months to go.

And then there is Jessica Watson to put us back on our heels... In May 2010, at the age of 17, she unofficially became the youngest person to sail non-stop and unassisted around the world... Congratulations to Jessica!  WOW!

P.S. - JUST IN!!!  Terrwyn's crew is now complete!  Angi (Minetta) Norrie and Nicholas Dormaar will be joining us in Tahiti bound for Tonga and then on to New Zealand!!!  They will be taking the starboard saloon sea berth... Welcome Angi and Nick! 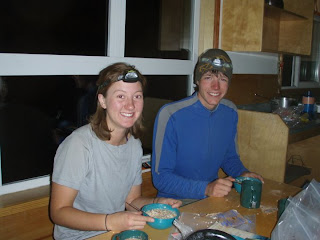