One night remains until our ETD on the morning ebb tide Saturday!!

Terrwyn is ready. We did a final sea trial last week end and now Terrwyn is all fueled up, provisioned and pointing south out of Canoe Cove...good to go. Cathy remains on board and Bill is finishing the last week of work in Calgary.

Thank you everyone for following our last year's preparation for "Sailing over the Horizon" , we are hoping to sail away 4 days earlier than our projected departure of June 1st , 2011.

Thank you, friends, relatives and workers who have encouraged and helped us refit Terrwyn for this our maiden voyage together.

Our time in Canoe Cove getting the work done on Terrwyn was well spent. The boys (and girl - can't forget Melinda who 'helped' read 'did' the brightwork on Terrwyn) at Blackline and Canoe Cove Marina did exceptional work! Here is a photo of Cathy and the Blackline boys who did such a tremendous job getting Terrwyn all spiffed up and ready to go. 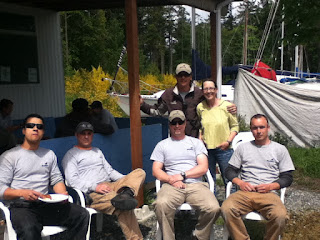 May the winds hold fair and we shall be reporting in once we clear Canadian waters.

Sea-Struck (an old New England term for a kid hanging about the docks obsessed with tall ships, the sea and the distant places they go... pestering people to take him along and out to sea. And then one day the boy is gone!).

Here is a photo of one very sea struck boy and his co-cap. 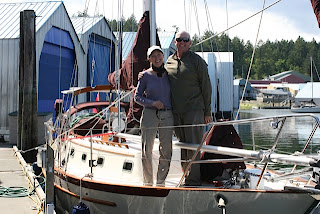