What to eat?  What to eat???  How often do you think about that after a long day at work, or a great day of play... what's in the cupboard?  Go out? Order in?  Hmmmm...  Whatever you decide it is relatively easy to do whatever you decide... or is it?

Heading off over the horizon requires careful planning and many days of purchasing and storing precious foodstuffs so that we will eventually be able to ask those questions and actually have an answer!

First how does one decide what one needs to take?  Our prime source?  Our cruising gurus Lin and Larry Pardey of course!  Lin is a very prolific writer and also a very enthusiastic and much experienced galley slave (whoops I mean chef) and her book The Care and Feeding of Sailing Crew

is undoubtedly the cooking bible for serious long distance cruisers.  In the book Lin talks about how she and Larry kept track of everything they used for six months before they were going on a long voyage. From experience they knew that they would be able to store and eat fresh produce such as fruits and vegetables for at least the first couple of weeks (and she goes into detail about how best to store and protect fresh produce... ) after that she knows they will need to resort to canned and dry foods.  To test what would be successful they started the custom of "Can Night".  She writes "At least one night a week, we ate a meal prepared from canned or packaged goods such as we might have had left after a week or two at sea." (The Care and Feeding of Sailing Crew, p. 40).

What a brilliant idea!!  So Bill and I have decided to begin our own version of the same concept only ours is called "Pardey Night" (if you say it fast enough it sounds like we're going to have a really fun night at least one night a week... pardey night...pardy night... PARTY NIGHT!!). 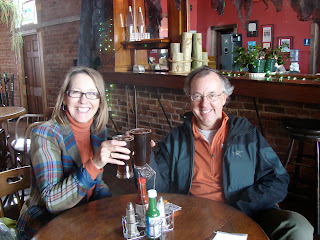 We will try out some of Lin's recipes, document which ones we really like and then I will add the ingredients to our ever growing provisioning list.

Of course, you know Bill - my enthusiastic co-captain has decided he is going to perfect the art of bread-making by the time we set sail and to that end he has already used Lin's recipe a couple of times and both times his bread was scrumptious!  I am furious with myself that I did not take a photo of his last culinary masterpiece...oh well, I know that I will have many more opportunities to do that before June 1, 2011 rolls around and I'll post them for you.  Until then here's the recipe:


Lin Pardey's Basic Bread Recipe
In large salad bowl, put
2/3 cup saltwater
1 1/3 cups freshwater
or
2 cups freshwater
2 tsp. salt
(NB - water should be between 90 and 100 degrees F, baby-bath temperature.  If you put your bare wrist in it the water should feel comfortable.  Too hot and it will kill your yeast;  too cool and the yeast will work too slowly.)
Add
2 heaping tsp. (or 2 packets) dry yeast
Stir until yeast dissolves
Add
1/4 cup sugar ( honey, maple syrup, or brown sugar can be substituted)
5 or 6 cups flour
Stir the flour with a spoon until the mixture is too stiff to stir, then start working in the last cups of flour with your hands, adding more flour until the dough stops clinging to your hands.  There is no exact measurement on the four because humidity affects the amount you'll use.  It's difficult to work in too much flour; just keep adding it until the dough feels smooth and doesn't stick to a clean finger when you press it firmly.
At this stage, it will appear smooth and feel almost satiny.  This usually takes 2 or 3 minutes.  If you want to knead your bread, do it now.  But if your are slightly lazy like Lin (yeah right!!) you won't!  Form the dough into a ball in the middle of the bowl, cover the bowl with a clean towel, and put it in a warm, dry place to rise.  The engine room - right after you've been running the generator- is great.  Or if you are engineless, like the Pardeys, a sunny spot that is out of the wind works well.  You need any temperature between 80 and 110 degrees F at this stage.  If you are in a cool climate, turn on your oven for 3 minutes.  Turn it off and let your dough rise in the oven.
In 30 minutes check the dough.  If it hasn't started growing, it is in too cool a location.  If it's starting to get a crust, it's too warm.  In 40 to 45 minutes, the dough should be about double in size.
When it has doubled, you can punch it down (yes, hit it with your fist four or five times) and let it rise again to get a smoother-textured loaf.  Or, if you have it scheduled for a meal and don't feel like waiting, grease some bread pans pre-heated oven will tend to produce a more evenly browned loaf.)  Turn the bread pans at least once during the process to ensure an even brown colour.  If your oven doesn't control perfectly, don't worry; the bread may bake faster or more slowly, but it is quite forgiving.  To be sure it's done, rap it with a knuckle.  If it sounds hollow, it's ready.
Remove the pans from the oven and let them cool five or six minutes.  Then remove the loaves from the pans and rest them on their sides.  Or set the loaves on a cake rack so the steam escapes from the bottom.
Don't try to cut the loaf for at least 15 minutes.  Not only will it burn your fingers, it will ball up around your knife.  This recipe gives you a crusty loaf.  The more you knead it, the less crusty it will be.
There are endless variations on this recipe...
For variety, add one of the following:
1 cup wheat germ
1 cup rye flour
1 cup granola
1 cup flour
1 cup dried potato flakes
1 cup oatmeal
3/4 cup raisins and 2 tsp. cinnamon
3/4 cup chopped onions
3/4 cup grated or chunked cheese
1/2 cup sunflower seeds or pine nuts
2 tsp. garlic powder,, 2 tsp. sage, 2 tsp. oregano
Substitute
1 cup fruit juice for 1 cup water
instead of making a loaf, make a dozen individual rolls; they bake in 12 to 15 minutes.
Divide the dough into three pieces and roll out each piece into a long worm like you did in play school when you made clay pots.  Then braid the pieces and let them rise.  Just before you bake the raided loaf, brush each lump with the white of an egg.  (I use my fingers for this job, rubbing the egg white lightly over the loaf.)  The egg white will add a nice gloss to the top of the loaf.
For a real treat, take a third of the dough after it has risen once.  Put it on a oiled cookie sheet and press it out to form an oval about 12 inches wide, and 18inches long.  With a knife, spread a thin layer of butter over the oval.  Sprinkle liberally with brown sugar and raisins, or nuts and bake as for a normal loaf then serve at teatime.
To tide you over before I get a photo of Bill's culinary  masterpiece here's a photo of some cinnamon buns that I made from this same recipe: 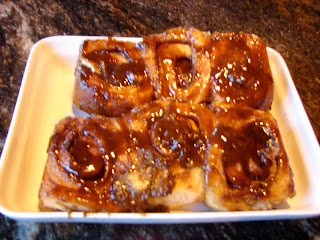 (As you can see I drizzled some gooey home made caramel sauce over the top... but that is for another blog!)
You can also use the same dough, but instead of the sweet filling, make a savory filling with chopped meat, onions, garlic, green peppers, and seasonings.
And, finally, this dough makes a great pizza base!
Posted by Cathy (aka Catherine) and Bill (aka William) at 5/17/2010 08:17:00 PM